A big well done to our brilliant netball team who represented the school impeccably at a tournament at SKA on Wednesday. The played three games in their group, winning against Goudhurst but losing to Claremont and Ide Hill (who both had very strong teams). We then played a third place play-off against Capel but unfortunately lost. This is the first time that the children have played together as a team and they performed excellently. We are very proud of them. Well done to Maisie, Molly, Julia, Kyle, Libby, Alia and Kiara! 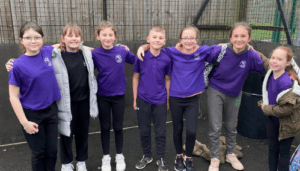